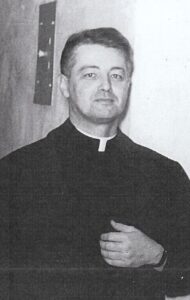 Father Walsh was born on Sept. 2, 1912 and at the age of 19 he entered the Novitiate of the La Salette Missionaries in Bloomfield CT. Seven years later, in Albany NY, on June 3, 1939, he was ordained to the Priesthood and assumed the M.S (Missionaries of La Salette) with his name. The order was named after the French village where our Blessed Mother appeared to 2 children in 1846.

Father Walsh served as Assistant Pastor in Our Lady of Sorrows parish in Hartford CT as a young priest, and in 1942 he joined the US Army where he served as a Chaplain during WW II until 1945. He was affectionately known as “Captain”, presumably a reference to his Army rank.

He came to Venice as an Assistant Pastor in 1972 where he served faithfully until his death on September 5, 1977 at the age of only 65. Six months after his death, our Council was formed; a fitting tribute to a man who was respected and honored by the entire community he served.

Father Walsh will always be remembered as a warm, kind generous man.  He was blessed with a powerful voice, loved to chat, and had a thousand stories to tell. He was loved by all who knew him, and very worthy of the honor of lending his name to our Knights of Columbus Council.