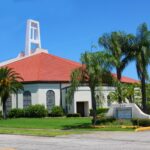 The Church of the Epiphany was begun as a mission of St. Martha’s Parish, Sarasota, in the winter of 1935 by Monsignor Charles Elslander to serve the Catholics of the Venice area.

In 1947 a former military chapel of Venice Army Air Base was transported to Tampa Ave. and Nassau St. where it was refurbished and dedicated as the first Epiphany Church.

On March 7, 1955, Epiphany Parish was established as a separate entity with Fr. Michael M. Reynolds appointed as the first pastor by Archbishop Joseph P. Hurley. Fr. Noah E. Brunner was later appointed as interim administrator during late 1955 and early 1956 because of the illness of Fr. Reynolds.

In Sept. 1956, Fr. George W. Cummings was appointed pastor of Epiphany Church. In 1959 Fr. Cummings built a parish school and a new church in 1960. (This new church is the present Parish Center on Harbor Dr.) The former military chapel was then used as a parish hall. By 1966, increased enrollment at Epiphany School made the addition of a second story to the building necessary. The second floor housed the new auditorium, science room, music room, library, classrooms, and conference rooms.

Fr. Esteban G. Soy became the third pastor of Epiphany Church in 1976. Marian Hall was built on the east side of the school to accommodate extra Masses and various parish functions.

In 1980 the present church was built. The 1960 church edifice was remodeled to serve as the new Parish Center.

With the Catholic population in Florida steadily increasing, Pope John Paul II in 1984 established two new dioceses, one of which was the Diocese of Venice. The Church of Epiphany was selected to become the Cathedral for the new Diocese and Most Rev. John J. Nevins was installed as the first Bishop of the Diocese of Venice.

Fr. Soy constructed the pre-school, cafeteria, computer, library, and classroom annex buildings. In 1999 Santa Maria Chapel in the school courtyard was constructed to serve the spiritual needs of the school children.

Fr. Soy retired in July 1999. At his farewell, Bishop Nevins announced the appointment of Fr. Robert R. Cannon as the new rector of the Cathedral on October, 1999. In March 2003, Fr. Cannon, a reserve Chaplain in the Air Force, was called to active duty. Fr. George Ratzmann was appointed as rector effective April 23, 2003.

On April 25, 2006, His Holiness Pope Benedict XVI named Msgr. Frank J. Dewane as coadjutor bishop of the Diocese of Venice.

On July 25, 2006, Msgr. Dewane was ordained to the episcopacy at Epiphany Cathedral. This was the first Episcopal Ordination in the history of the Diocese of Venice.

On January 19, 2007, His Holiness Pope Benedict XVI accepted the resignation of Bishop Nevins. Bishop Dewane, succeeded him as Ordinary of the Diocese of Venice.

Since 1959, Epiphany Cathedral School has provided Catholic education to students throughout Sarasota County and surrounding areas.  Epiphany has earned a reputation in the community as a school that is academically rigorous, assists children in developing a deep spiritual relationship with God and seeks ways to serve others.

As a Catholic school within the Diocese of Venice, Epiphany Cathedral School is fully accredited by the Florida Catholic Conference. Working with parents, our students are taught the skills needed to fulfill their life of purpose. ECS provides a disciplined, caring, and faith-rich environment that educates the whole child and supports that mission.

The school's curriculum, established by the diocese, ensures that children develop academically and spiritually. Lessons are created to reflect our Catholic faith and the gospel values. Passing along our faith and ensuring children have a strong and lasting relationship with God is evident in all they do. Based upon diocesan curriculum standards, academic expectations are developmentally appropriate and reflect increased rigor for many of their students. All of their students graduate from ECS well prepared for the next level of academic preparation and most go on to higher education after high school.

Epiphany Cathedral Catholic School offers children from age 3 (preschool) through grade eight a premier education for their life of purpose. The administration, together with the faculty and staff, work together with parents and guardians  to lay the foundation for academic excellence, strong leadership, well-grounded character development and service for others.