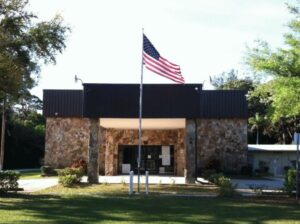 Council 7052 received its charter on March 1, 1978. Its primary mission is that of all Knights of Columbus - charity, fraternity and shared religious beliefs. There is also a strong social element which includes family and community.

The Council began by meeting at Epiphany Parish. Shortly thereafter, weekly bingo games were begun at the local civic center. After several years of saving, enough funds were accumulated to purchase our existing property. The property had lately been a fishing camp, with only the original small white building on it.

In accordance with KofC requirements, this property is managed by a "Home Corporation", the Christophers of Epiphany, Inc., separate from Council 7052.

Years passed, and many meetings and events were held in the original white building until sufficient funds were available and the existing Knights Hall was constructed. After a period of time  all borrowings were paid off.

The council conducts a number of fund-raisers during the year, including the "Tootsie-Roll Drive", Friday Lenten Fish Frys, a charitable Golf Outing and a Casino Knights, all of which benefit various area charities. We also provide a number of social opportunities such as Sunday weekly breakfasts during winter season, picnics and dinners for various occasions.